Tag Archive for: a people’s history of the united states

You are here: Home / a people's history of the united states 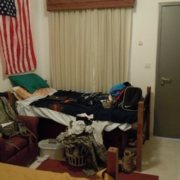 I’ve found myself in a bit of a funk lately, and I’m pretty sure part of that has to do with a lack of physical activity. I haven’t been out for a run since early November, so that will have to change. The reason I stopped running is quite the adventure.

I was bit by a dog in the left calf muscle. I could leave it at that, but that just doesn’t do the scar that’s on my leg justice. Story time.

Here I was, a regular night-or so I thought- was brewing up just nice. I was jamming out in my kitchen like I always do when I have the time, when all of a sudden: “BUR-BURRRM” my 5s with the screen cracked signaled to me. A friend of mine who went to EDC Orlando was down and out with the wook flu. A devout vegan, I heard her distress call and answered as fast as I could! She needed soup, but she needed soup that met her dieting standards, her taste standards, and something practical enough to unravel the miserableness. What was I supposed to do, let her die? Not on my watch. No suh, not up in here.

I should have known things were going to backfire on me from the start- the first two ingredients I had written down on my list: thyme and parsnips, were sold out at Winn-Dixie. Not a huge deal, not on a time-constraint because this is a good deed and a favor, but time was absolutely of the essence… or should I say… thyme… was absolutely of the essence(/Dr. Evil pinky to mouth). An extra trip to Publix for the snips and thyme, good to go, back to home base for prep and cook-time. Fast forward another hour, and the soup is ready for delivery.

Any who have ever seen or been in my car know how beautiful it is but how beautifully unpredictable it runs. How I made it to Pensacola and back for the hurricane this August, I still don’t know, because my car started overheating when I got to my friend’s apartment complex. Not a huge deal, not on a time-constraint because I made it to the destination, just gonna have to let ‘er cool down for a little while. Because of the way I packaged everything for the soup, and because my friend had her dog with her when she met me at my car, I decided I’d help her carry the soup to her quarters. This is where I guess I fucked up, because literally as we’re opening the door to her place, she’s telling me about the other “dog that lives here” and oh hello there, angry fella, oh good they have your collar, oh no, they don’t have you by the collar anymore, you don’t like me, I can tell because you’re trying to bite me. I’m standing here helpless with a giant pot of hot soup while this angry 70 pound dog is trying to eat my dick for dinner. Literally, if I wasn’t wearing a hoodie with a front pocket, I’m not sure what it would have bit on the first go. I tried to distance myself, but with the soup in my hand, things were happening fast but I figure my agility was at roughly 15% out of 100%(if you ever need the formula to calculate that, let me know). I couldn’t separate with enough distance, the next thing I knew, it’s mouth was on my leg teeth-first.

Legend has it, I didn’t make a damn sound or a peep of terror the entire time. Stone cold, but honestly, that shit really did hurt. The car comes into play again now, because it takes a good half hour to let the car cool down, and all of this happened within about 3 minutes. So, with my leg oozing blood and the calf muscle twitching like a bad case of leg-Tourettes, in a bit of pain, I’m sitting in my car digesting the scenario that just happened, texting a few people and trying to assess the damage done to my one-of-a-kind calf muscle… just patiently waiting for my car to cool down so I can just go the hell home and eat one of the edibles she gave me… time is yet again, of the essence, and not on my side once again.

None of this has anything to do with the turning point of my life… I hope I end up getting to that. Buuuuut, I digress.

Fast forward. Start up the Jag and start my way home. It’s about a 20 min drive home, not a huge deal, but about 30 seconds into my B-line for a Band-Aid I noticed that I was the proud new recipient of a blown out rear-driver side tire. Mind you, the second flat tire in just 3 days at this point. God, you mysterious lil’ Devil, you. I’m on to you and don’t think I’m not! To bring this story to a close, I finally got a friend to come snag me and bring me home. I ended going to the ER, getting some antibiotics and pain pills prescribed that I never did end up filling, and then I lived happily ever after.

I was pretty pumped about the scar, but there was more reward than that. On top of a bunch of other goodies exchanged for the soup, my good ‘ol friend still felt terrible about my misfortune, and it just so happens that she’s related to the voice of Michelangelo on the animated Ninja Turtles cartoon on Nickelodeon. Have a look at this badassery rightchea: 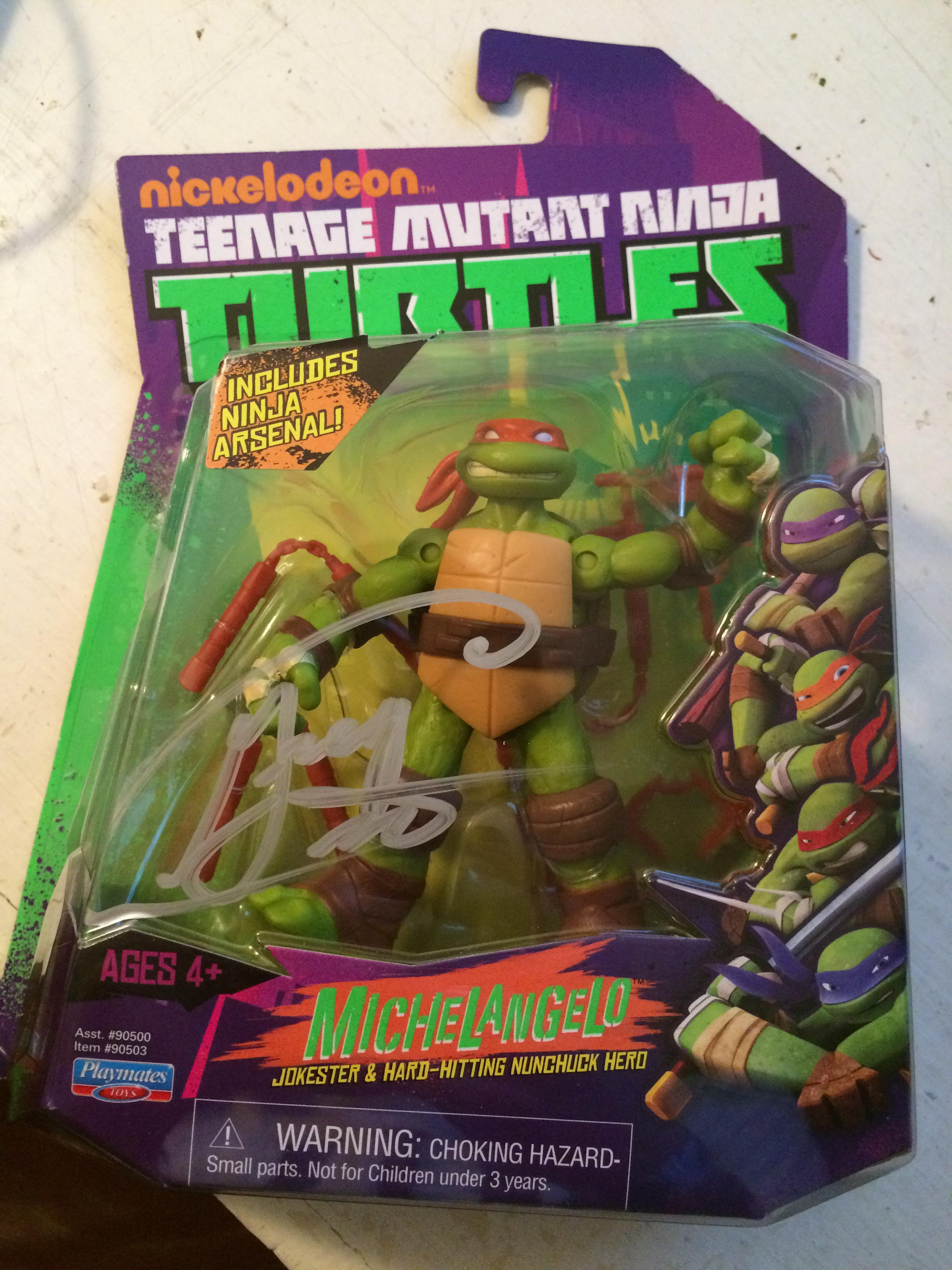 What should have taken 2 hours from start to delivery to my being back at home all in one piece actually took me about 4, with a couple hours of OT in the ER. But. Did you look at that autographed figurine yet? Totally worth it. Maybe I’ll run Bayshore tomorrow.

So, I wanna drop some knowledge in this before I shut it down. This is where the turning point is laid on the table.

In 2011, I was taking a US History course through the University of Maryland University College. It was a distance learning course, because at that time, I was in the Air Force and I was somewhere near the middle of a 365-day volunteer special duty assignment in Qatar. I would receive care packages from family and friends from time-to-time, but one care package came from one of my old soccer coaches from the early intramural days. Along with some snacks, he’d sent me a copy of Howard Zinn’s “A People’s History of the United States” to supplement my History course. I didn’t think you were allowed to ship weapons through USPS, but I’m glad he sent me that book, because from the very first page of that book, I started reading some things that were far from ever being mentioned in the class textbook my classmates and I were using for reference. Or any textbook I’ve ever seen before. Zinn, a bombardier in the Air Force during World War II, earned his PhD after the war. He first taught for 7 years at Spelman College, an all-black women’s school in the South. He was eventually fired because he supported his students during the civil rights movement in the 60s. He then taught at Boston University until he retired in 1988. Quite an eye-catching resume, if you ask me.

I cannot stress enough how devastatingly enlightening that book was to me. It covers grounds from Columbus’ voyages all the way up to the War on Terror. Unfortunately, Dr. Zinn passed away shortly before I even knew who he was. Fortunately, his work has been laid out for us to pick up where he left off.

I can remember making ‘pilgrim hats’ and learning about Squanto(who spoke English so well because he was captured) and John Smith, Pocahontas, Thanksgiving (which wasn’t celebrated until the year 1817), etc. in Pre-School. We are taught to celebrate Christopher Columbus while we’re still pissing our pants. If that isn’t breading ignorance, I don’t know what is. There needs to be a time, soon hopefully, where we lift the drape and let the light in, because until we start educating ourselves and then each other with the facts we have been so conveniently left in the dark from as a collective mass, we are going to continue to see the same mistakes repeated over and over again.

Shut the fuck up and read. I’ll just leave it here for now.

You can find a cheap, used copy of A People’s History of the United States here. 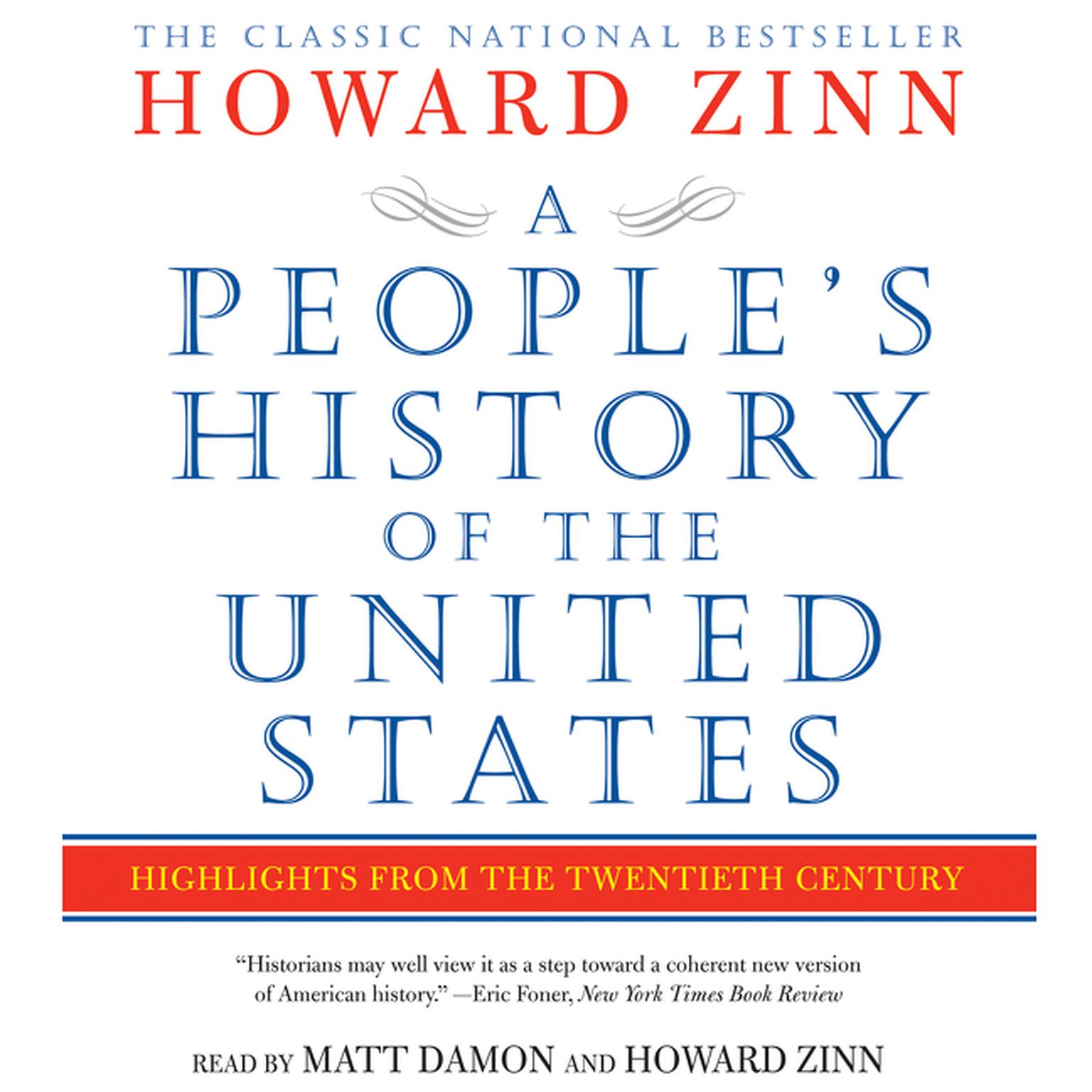